We didn’t reach our goal, but we wouldn’t have been able to raise any money at all without your collective support:)

It’s a challenging time for everyone. But it gets easier when we are doing this together.

We celebrate it and will apply all the funds received to support members of our neighbourhood through Frog Hollow Programs.

Please make sure to use your voice and platform to continually support your local Neighbourhood Houses & their work. 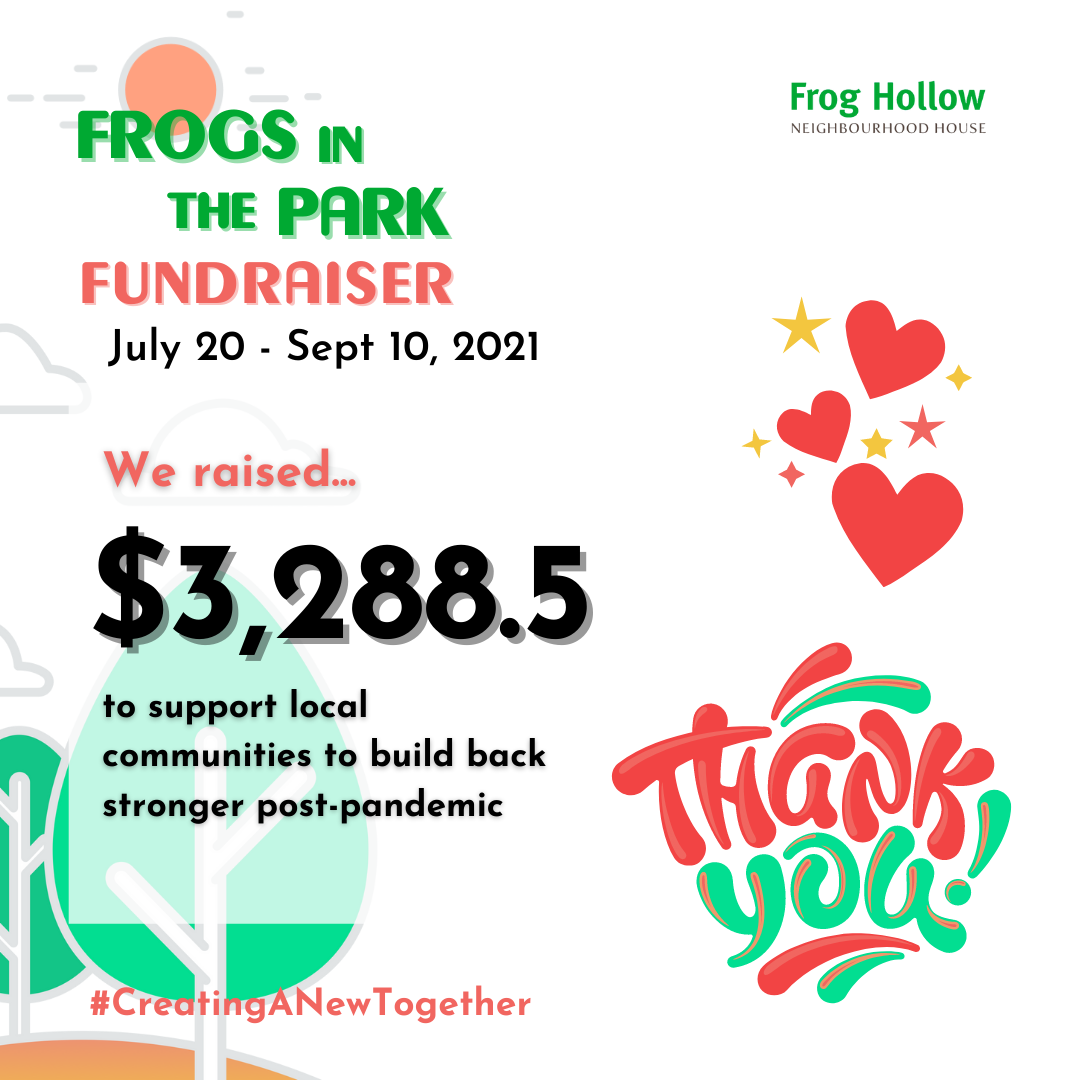 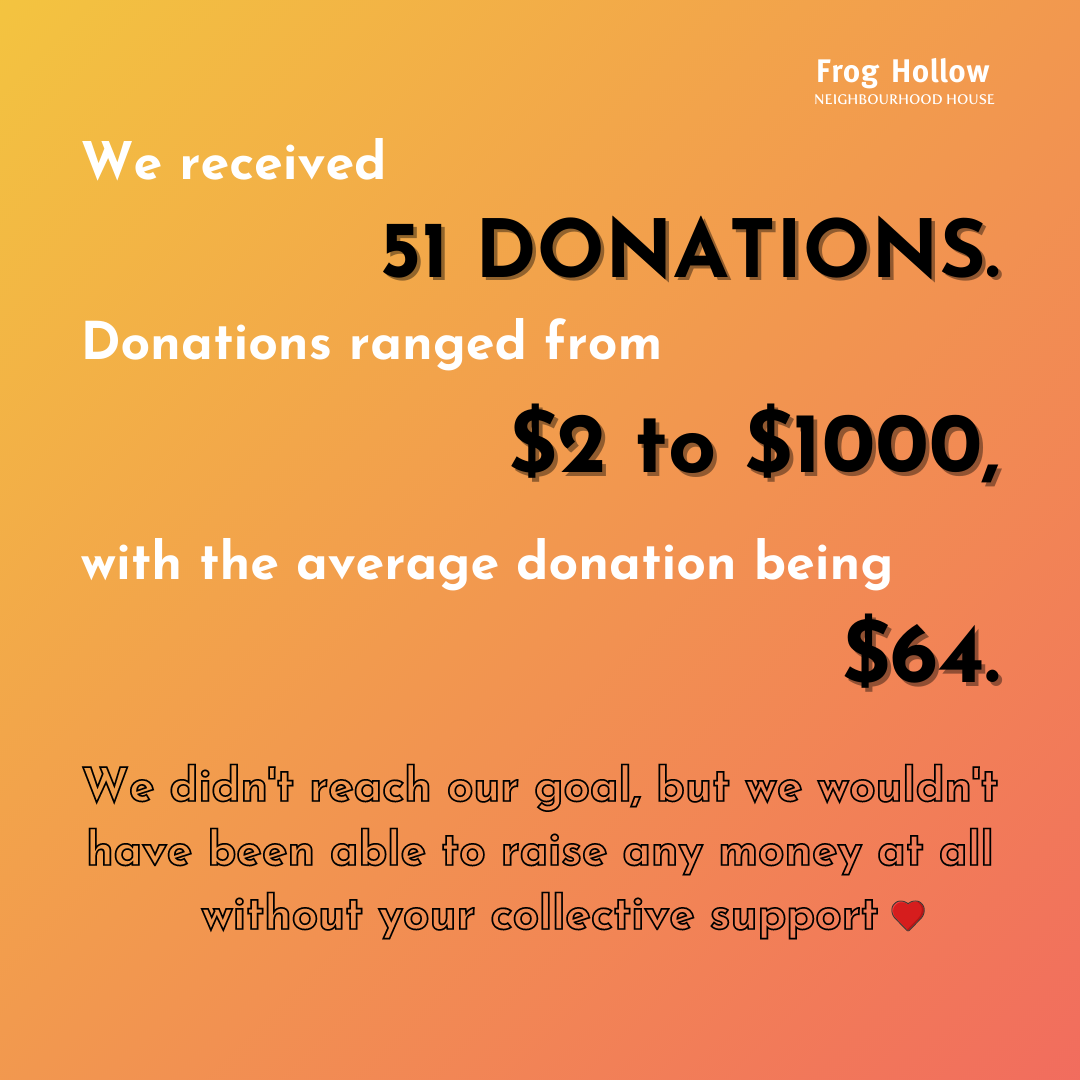 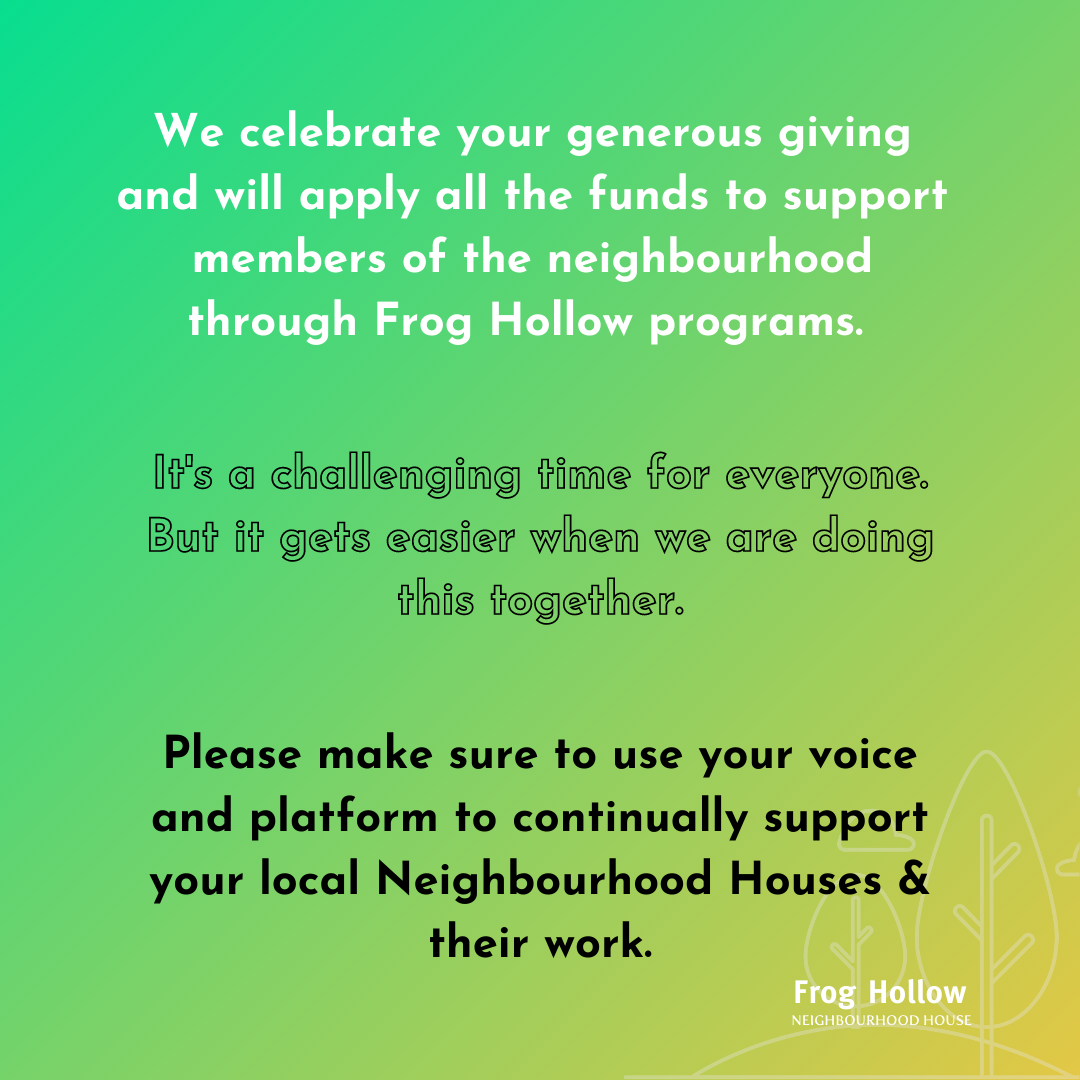 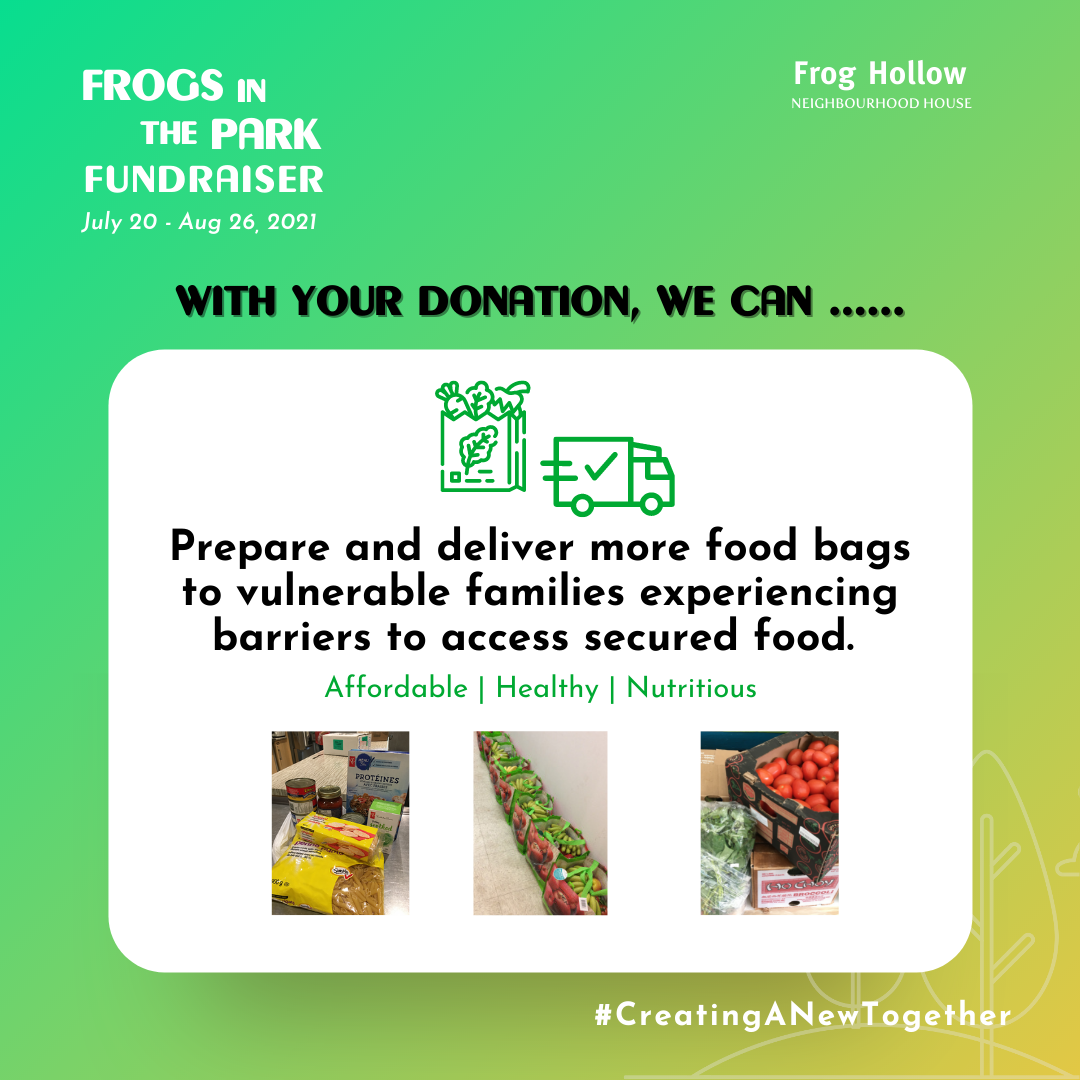 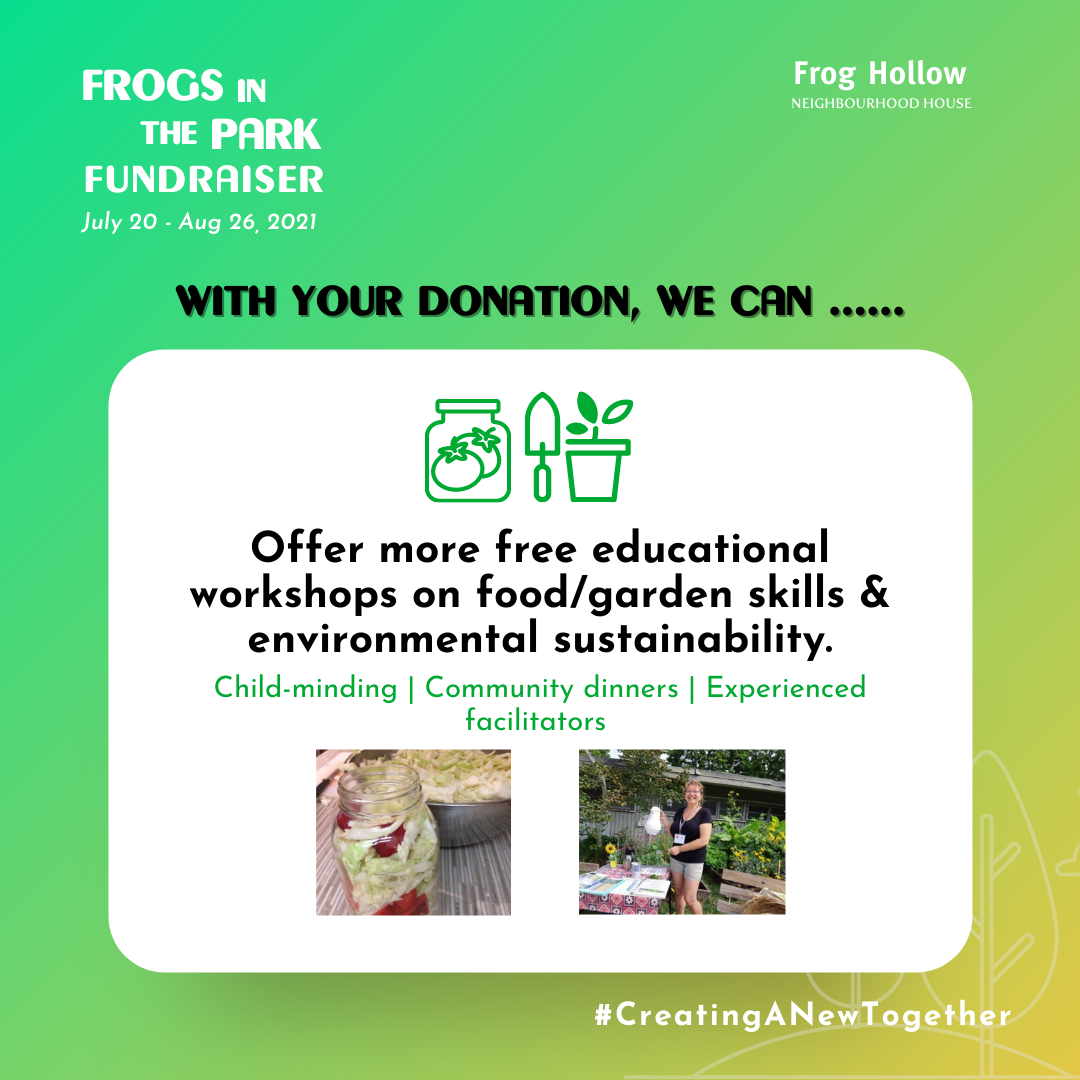 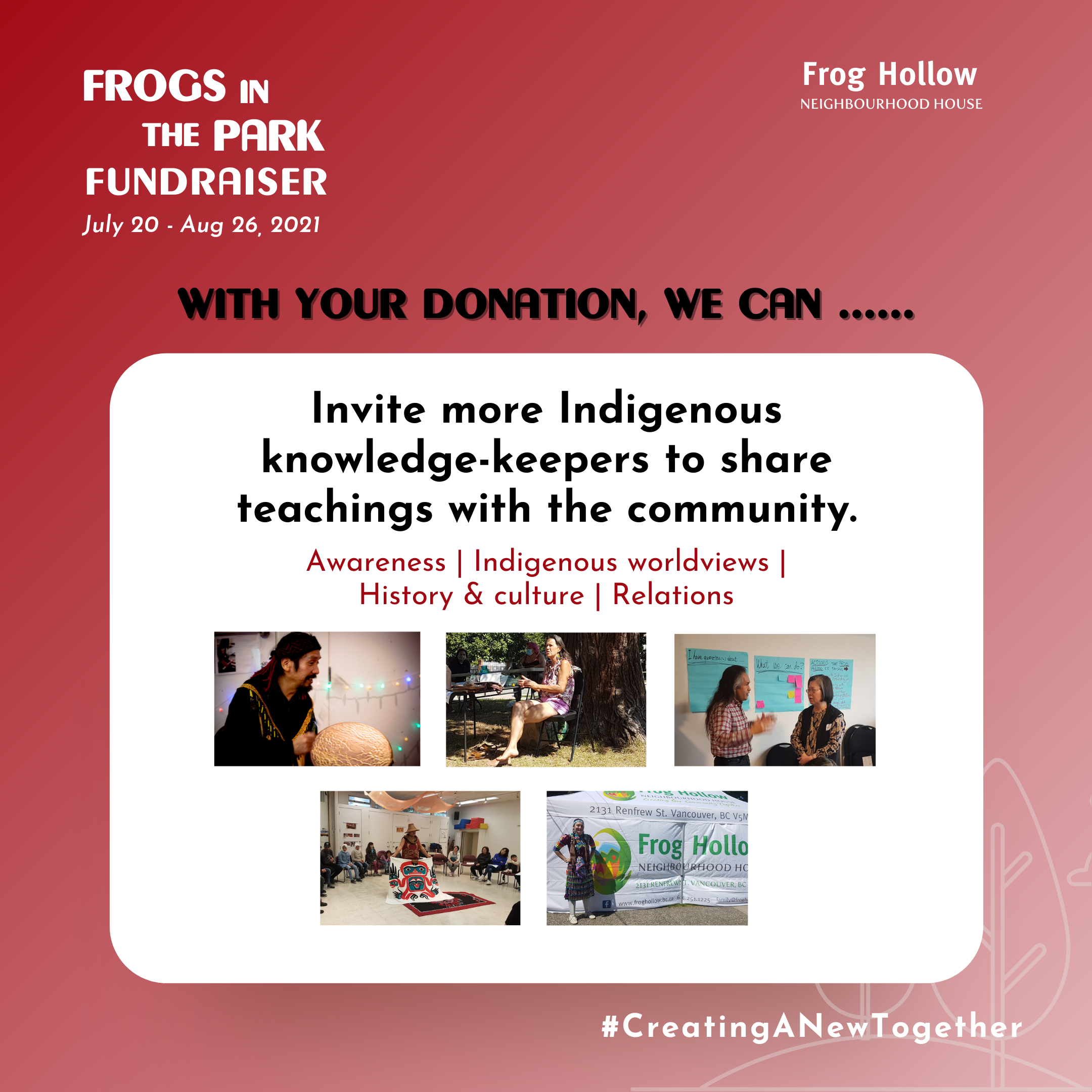 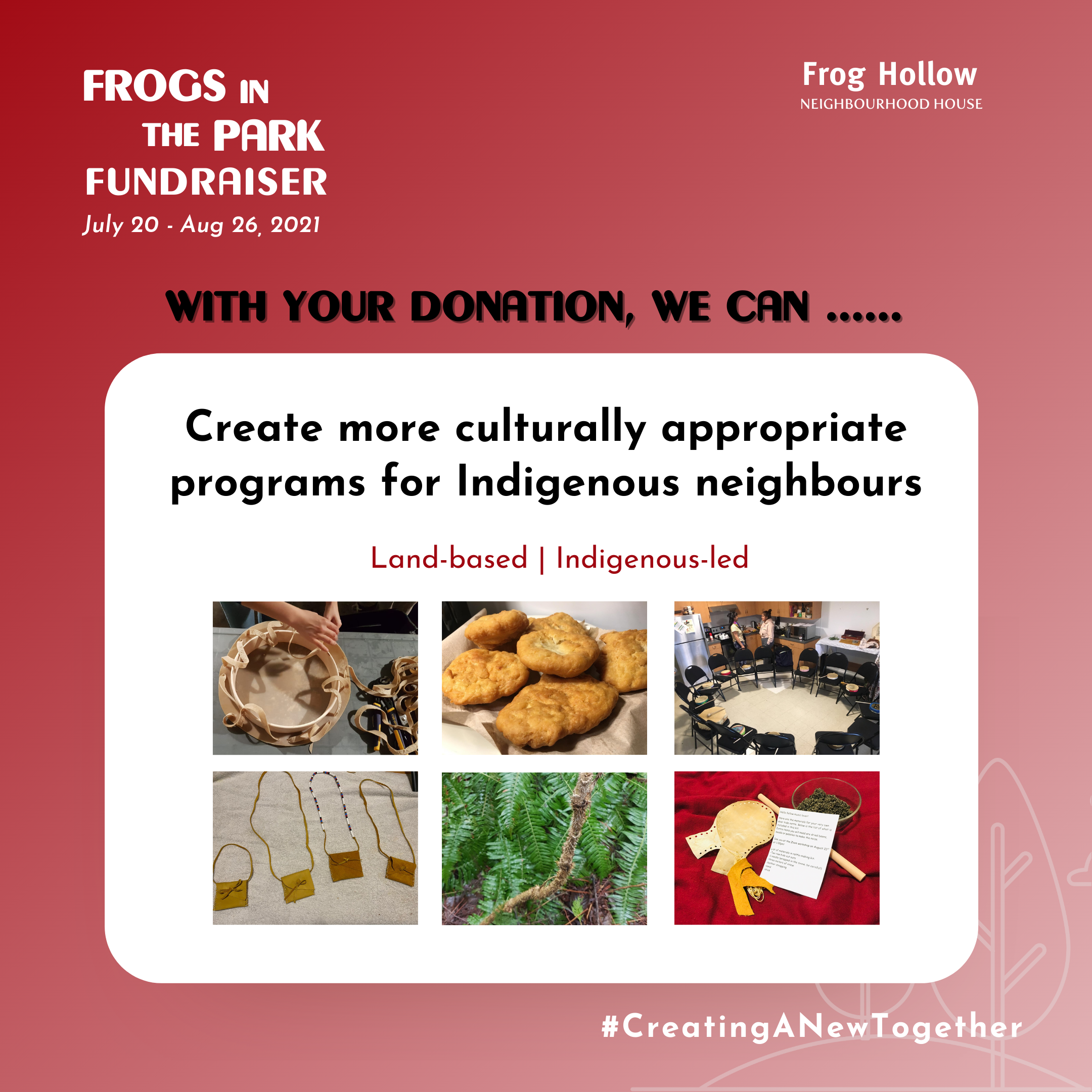 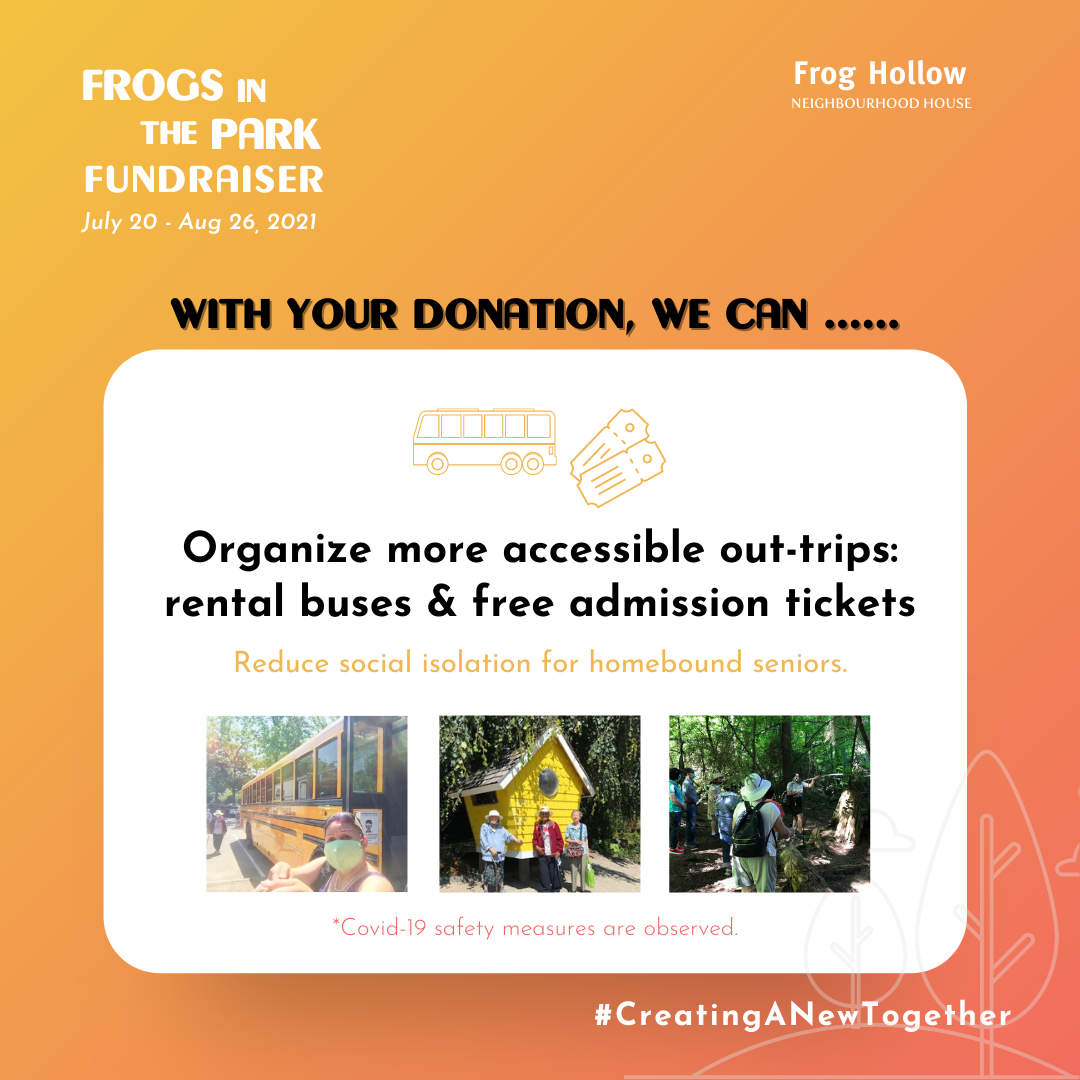 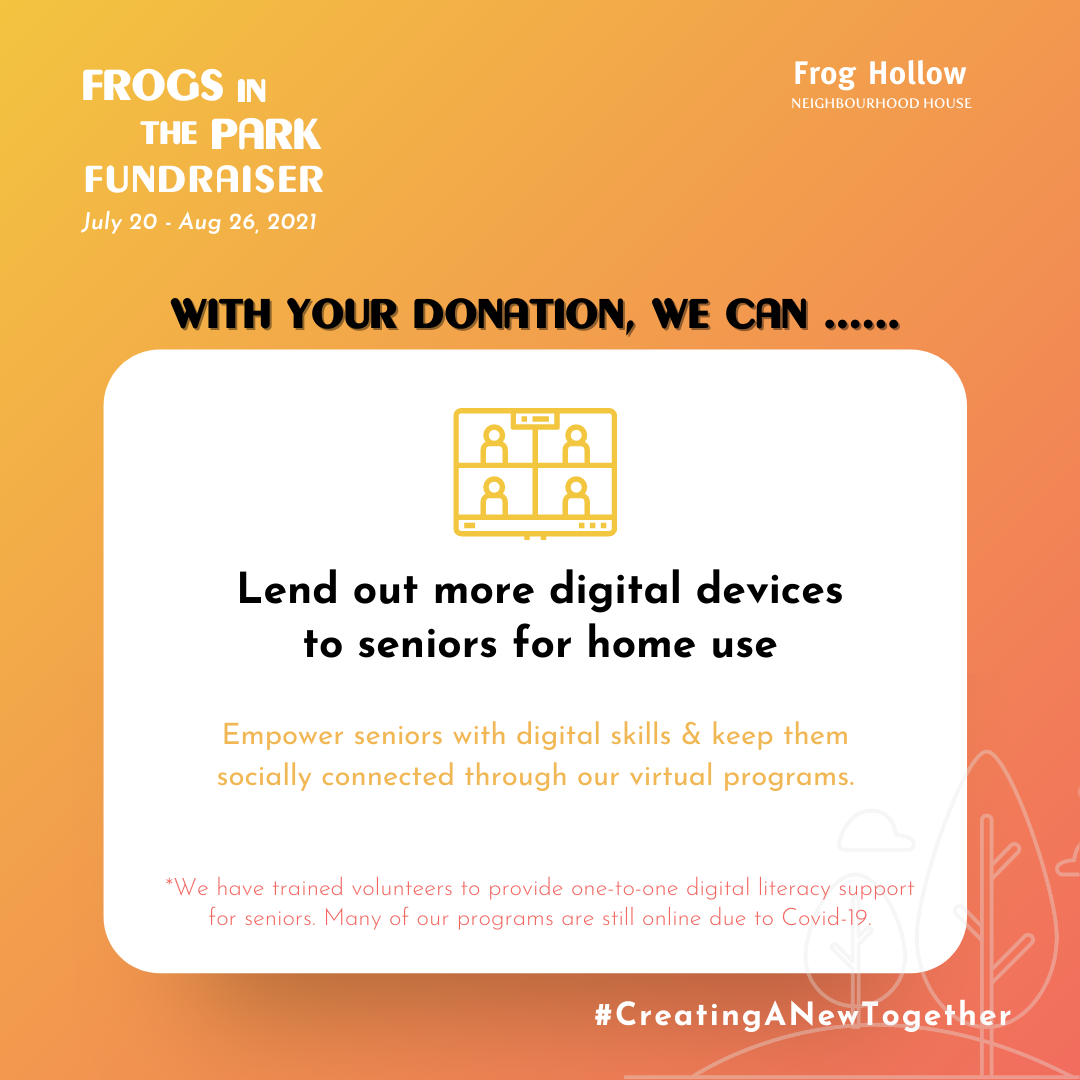 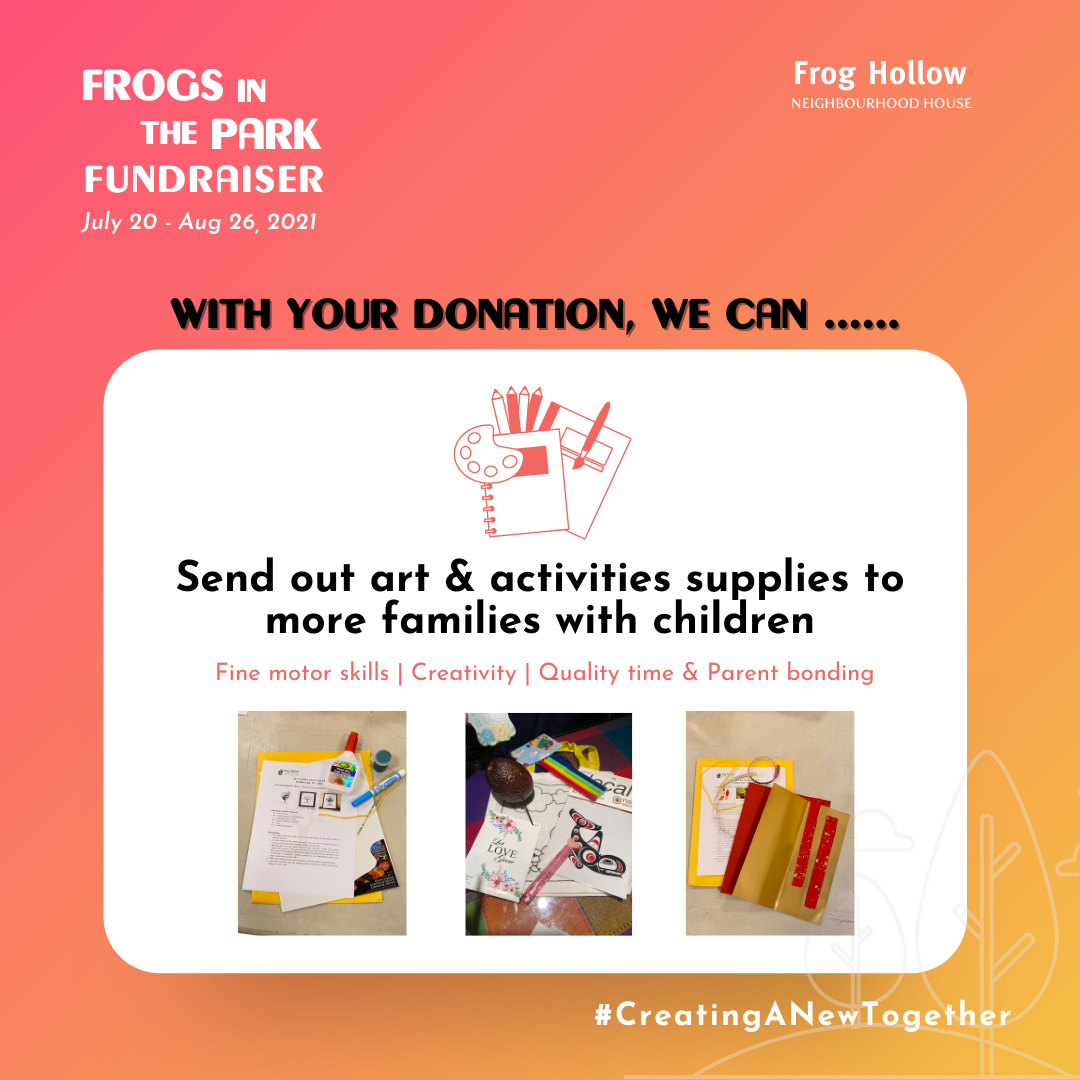 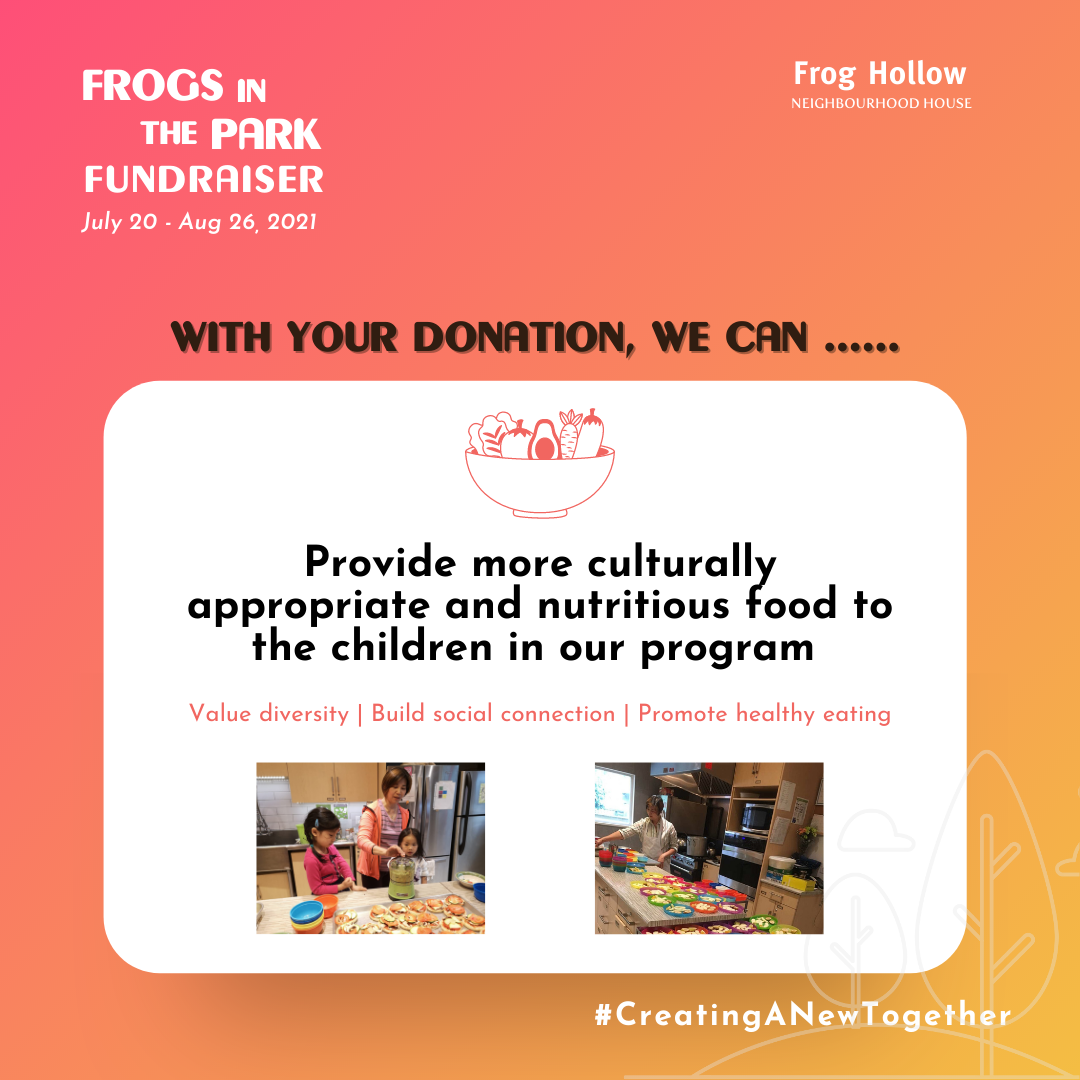 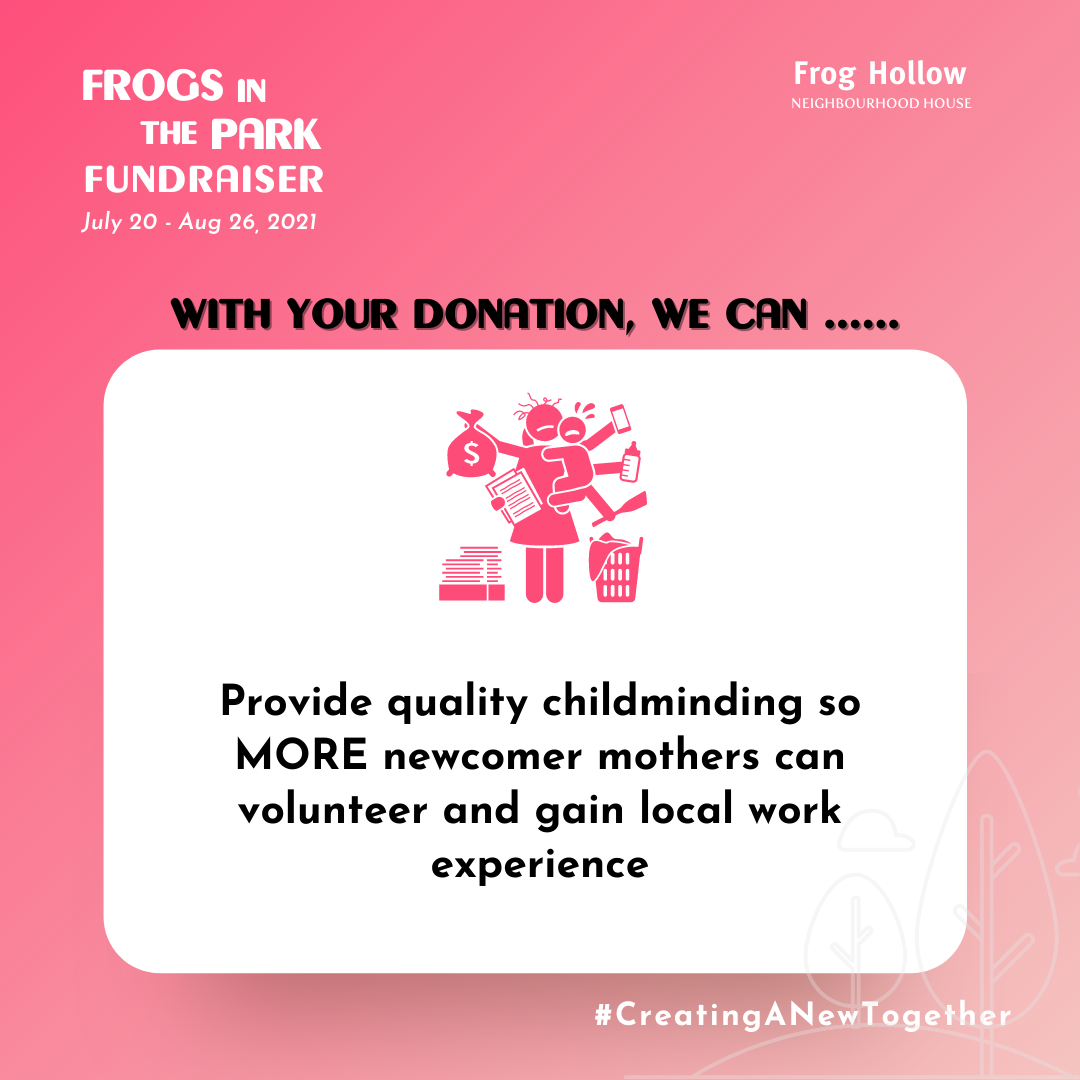 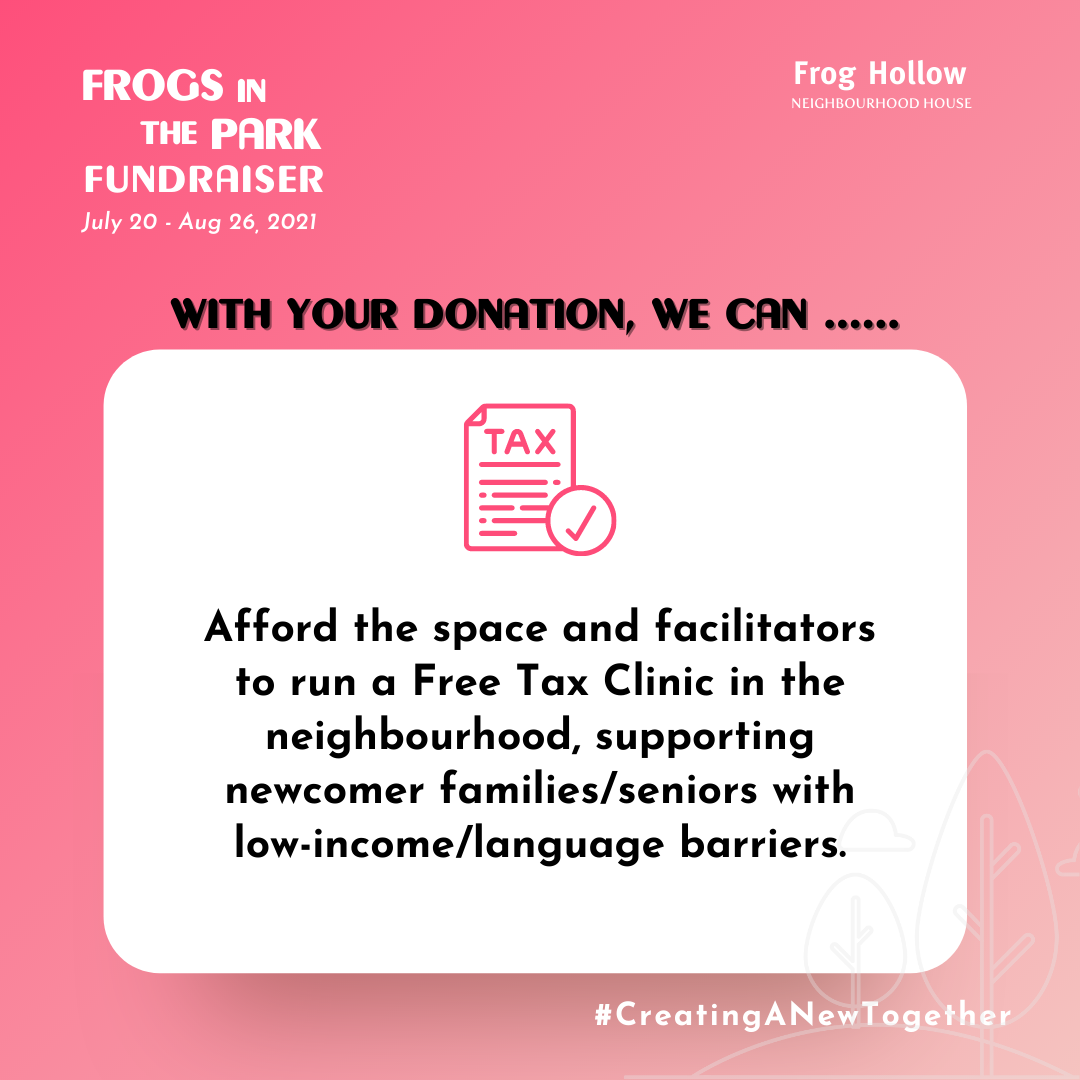 About Frogs in the Park Fundraiser

This summer, we are running a 6-week fundraising campaign(during our Frogs in the Park summer program), empowering local communities to build back stronger post-pandemic. #CreatingANewTogether

How:  Online or In-person (click here to know more)

Individuals and organizations are welcome to donate online or in person.  We accept VISA, MasterCard, cash and personal cheques. Your donations are tax-deductible and an official tax receipt will be issued for donations of $25 and above.

All funds raised will be used to support five of the Frog Hollow Neighbourhood House programs:

Hit the yellow donate button below! Be sure to write the note “Frogs in the Park” to your donation. You can also donate to a specific program among the five.

E.g. if you resonate the most with supporting decolonization initiatives and Indigenous communities, write “Waacus Salee Frog Spirit Indigenous Program” while donating online.

Where to write the note? 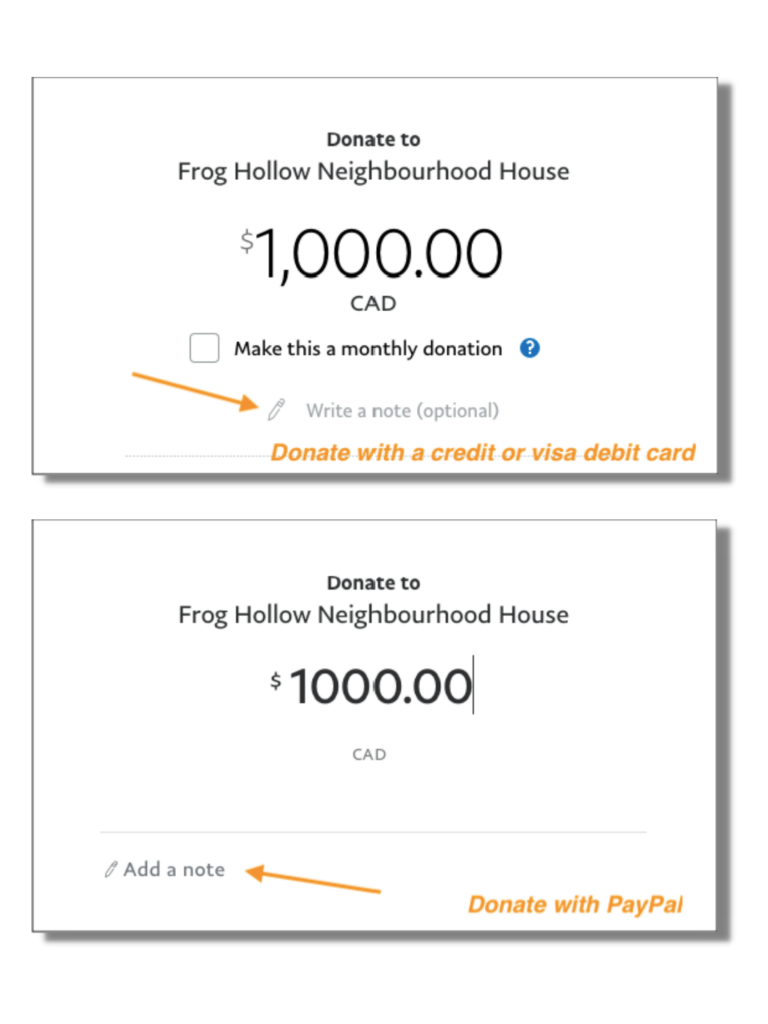 Mail or Drop off in-person

Frogs in the Park Fundraiser Table @ 2690 Grant St. Vancouver, every Tuesday, Wednesday and Thursday from 930 – 1130am (cash or cheque dropoff. NO mails)

Why did they support us … 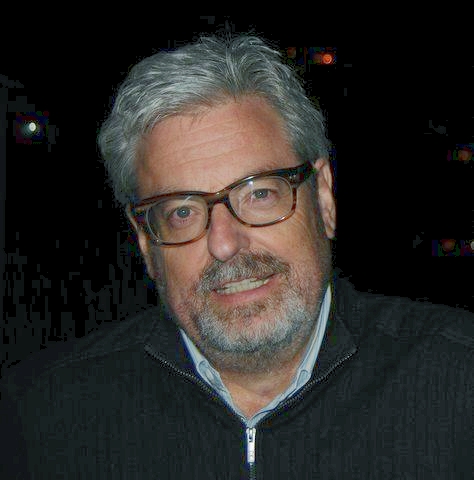 “Frog Hollow’s authentic, grassroots approach to community support resonates with me”, says Bob. “I am looking forward to seeing the new trike in action at Frogs in the Park this summer!”

Although not a resident of the Hastings-Sunrise area, Bob has fond memories of the neighbourhood. “My childhood memories include bus rides to Woodwards’ with my grandmother” recounts Bob, whose parents and grandparents had lived in the neighbourhood over the years.

After meeting Gary Dobbin, Executive Director of Frog Hollow Neighbourhood House and learned about the work we do, Bob has supported Frog Hollow in numerous ways he can, donating computers to our youth program on Commercial Drive, and most recently, made a $3000 donation to replace our stolen trike.

Founder of TransAction Heroes, Bob has a long family history of activism. His grandmother had been a union organizer and he was involved in the creation of a thrift store after the 2010 Vancouver Olympics as a RayCam society volunteer. “Frog Hollow’s authentic, grassroots approach to community support resonates with me”, says Bob. “I am looking forward to seeing the new trike in action at Frogs in the Park this summer!” 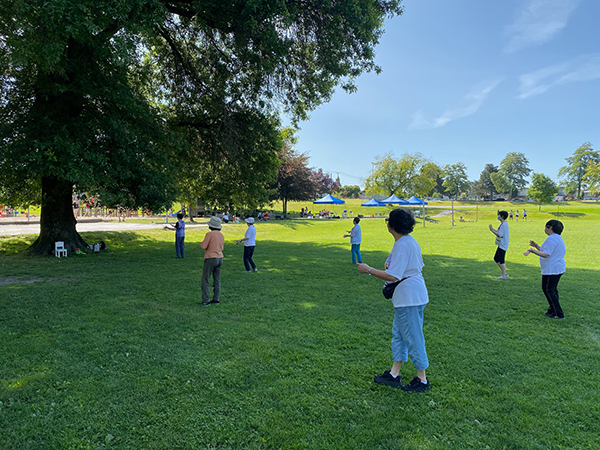 Lanny would take her 92-year-old mother who lives in the Hastings-Sunrise neighbourhood for walks, and that was when she first found Frog Hollow Neighbourhood House, “I thought it might be a place for her to meet some other seniors with activities…

Lanny would take her 92-year-old mother who lives in the Hastings-Sunrise neighbourhood for walks, and that was when she first found Frog Hollow Neighbourhood House,

“I thought it might be a place for her to meet some other seniors with activities…just to get out of the house. ….she’s quite isolated, and that’s how I feel about a lot of the seniors if they don’t have any siblings or family members…”

Lanny says the virtual programs are not senior-friendly for older adults like her mum, who has difficulty even turning on the TV. This is why she wanted to donate to the Neighbourhood House on the Go program.

“…I was so excited about the bicycle program. They [Frog Hollow staff and volunteers] actually could go to the homes and visit with them [homebound seniors] and… that reaching out and the phone calls are important….they can bring them some fresh fruits and veggies, they can bring them … some pastries whatever it is. I wanted to see the program work, so my sister and I put that total amount together.”

Retired about eight years ago as a school principal, Lanny has always been an active volunteer in local organizations and neighbourhood houses. She hosts workshops on multiculturalism and emergency preparedness.

Lanny is passionate about building a community that’s inclusive for all, especially seniors, “I would be happy to do some volunteer work. I like to help some of the seniors who are housebound and don’t have a lot of English…like my mum.” 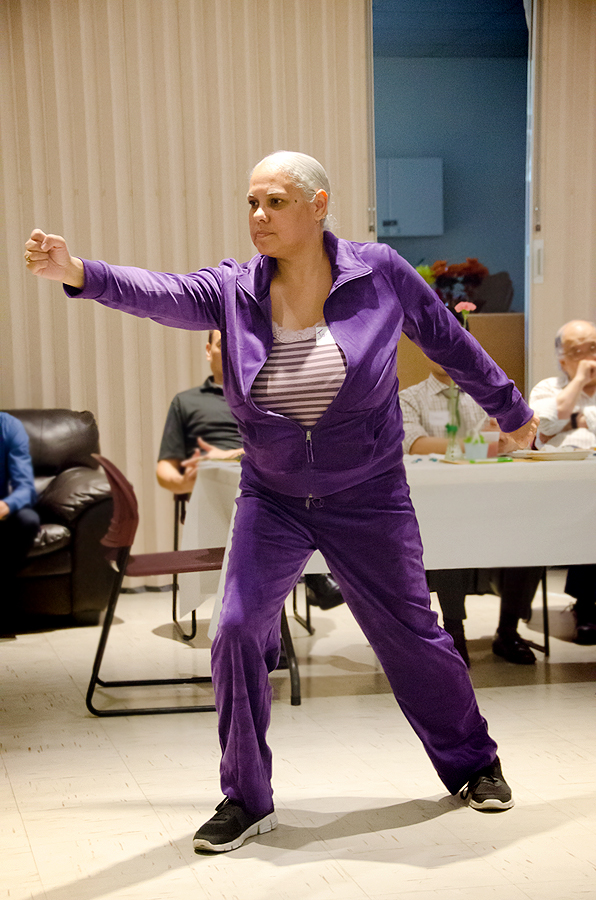 “When my daughter was very little, when I started tai chi, I had always dreamed of teaching tai chi…It was a dream come true.”

When you imagine a tai chi instructor, you don’t typically think of a female of African and Indigenous descent. This is how many of the Frog Hollow seniors know Jacqueline. When she started volunteering, she told a staff that she had always wanted to teach tai chi. Finally, the opportunity arose and it was an empowering and rewarding experience.

“When my daughter was very little, when I started tai chi, I had always dreamed of teaching tai chi..It was a dream come true.”

To this day, many seniors still refer to her as teacher. Jacqueline has found belonging and connection at Frog Hollow that she never had before.

Jacqueline first became familiar with Frog Hollow when her niece went to the daycare over 30 years ago.  “It’s been a process since then. When I found I had that one good connection with Eva and joined the compassion club…that was extremely healing for me…I felt anything I had to say, everybody listened. It was the first time in my life…It was extremely important to be heard.”

Another place of healing that Jacqueline found was the Frog Hollow stewarded space at the Clinton Park Fieldhouse, P’ipa:m Lelum (Frog House), where she volunteers to look after the Indigenous garden.

“The vision was a place for healing and it turned out to be exactly what I wanted… I always dreamed of a place to come where it’s green…now it’s here. We have an Indigenous garden and I get to volunteer to nurture it..Garden of healing.”

…(The programs) were extremely learning for me..when we did that reconciliation program..I got triggered and it really taught me because.. I got into this state of resentment and it caused me to be selfish and I let it go…and it was the happiest I had ever been in 30 years..that resentment was gone…I was happy with all the people that were not Indigenous to come because they needed to learn…When you first invited me to come, I was against and I still am against reconciliation. I said I’ll go but I’m against reconciliation..People will ask me what’s going on, you’re so happy, and I would say I went to this program and all my friends were there and we shared so much and I got to release that resentment and I’m the happiest I’ve been in 30 years and they were like wow!”

←back to Donate to Frog Hollow